The Nationals Member for Gippsland South Danny O’Brien is renewing calls for the Andrews Labor Government to undertake a formal review of power outages following the recent storm and subsequent blackouts.

Mr O’Brien said a second widespread blackout event, with some Gippsland customers now facing a week without power for the second time this year, demanded government action to review the resilience of our systems.

“In June this year after a significant storm event we experienced hundreds of thousands of Victorians without power for prolonged periods – some Gippslanders were offline for two weeks.  I called on the Government to review the regulatory framework for electricity back then, but that call was ignored and here we are again.

“I am very conscious these storm events put a lot of strain on the network and the ability of AusNet Services to repair and reconnect hundreds of thousands of customers across the state, but we can’t be expected to just accept this as a common occurrence.

“In a developed economy, having homes, businesses and farms, particularly dairy farms, without power for a week or more is just not acceptable. 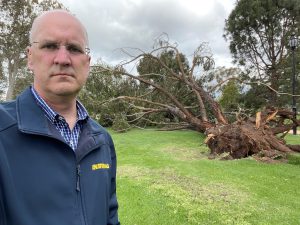 “It’s time for a formal review or Parliamentary inquiry to ensure that this doesn’t happen again.  We should be looking at the resilience of all our utilities, particularly electricity and telecommunications systems, the regulations governing private network providers, response times, the provision of emergency information and options for mitigating blackouts.

“We need to learn from these events and I think we can always do better.”

Mr O’Brien said distribution companies such as AusNet Services have conditions on the licenses granted to them by the State Government and this should form part of any review.

“Like last time, the demands on AusNet from such a widespread event are enormous, but telling a resident that they are one of thousands still cut off is not much comfort to them.

“I know some people think the solution is to underground all power lines or remove trees from near transmission, but these are both horrendously expensive options and would ultimately be paid by all consumers. Perhaps though we should be looking at options in the high risk areas.

“I remain conscious that any additional conditions or restrictions placed on a power company’s license could also end up costing people more on their power bills and that’s the last thing we need.

“However, after two massive events this year where people went without power for over a week, we must review the systems to minimise the chance of this happening again.”

Need help with an Issue?

Win for schools in Yinnar and Leongatha