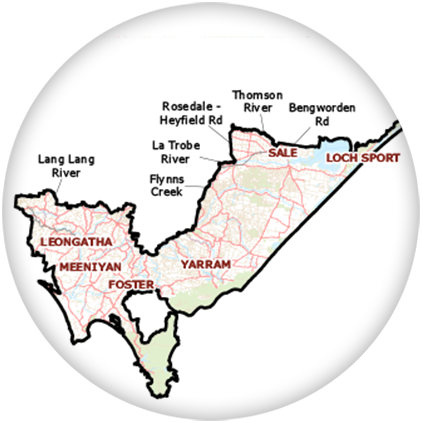 The electorate includes all of South Gippsland Shire and the southern parts of Wellington Shire.

Since 1929 the district has been represented largely by The Nationals, the most recent member prior to Danny O’Brien being Peter Ryan, former leader of the Victorian National Party and Deputy Premier of Victoria.

Key industries in Gippsland South include agriculture, timber production and tourism. Dairying is the biggest agricultural contributor to the local economy.

The region is also known for its beautiful natural features including Wilsons Promontory National Park, Corner Inlet, the Gippsland Lakes and the Strzelecki Ranges.

Mr D O’BRIEN (Gippsland South) (16:46): Well done, Acting Speaker. Even the actual Speaker cannot get that one right most of the time. I have

The Nationals Member for Gippsland South, Danny O’Brien has invited the Minister for Energy, Environment and Climate Change visit Gippsland to discuss the proposed Renewable

Mr D O’BRIEN (Gippsland South) (14:19): Minister, for the record, my constituent specifically asked to remain anonymous but wanted this question raised. Thankfully when a

Mr D O’BRIEN (Gippsland South) (14:15): My question is to the Minister for Ambulance Services. A constituent in South Gippsland contacted me this week about

Mr D O’BRIEN: It was an honour to take part in recent ceremonies to deliver seedlings to 100 local schools as part of the Lone Pines

Keep in touch with Danny online as he connects with your community.